The year could barely end on a better note as in the last days we have signed the agreement that enabled Malta receive the the first tranche of funds under the Recovery and Resilience Facility. This first payment of €41 million which arrived on Friday, will enable our country to set in motion the plan that will consolidate our movement to a green and circular economy, accelerate our process of digitalisation, and enhance the social welfare we thrive on in the new year.

It is only a small part of a €320 million grant component resulting from long negotiations the Government of Malta had with the European Commission which dealt with our objectives and the necessary reforms to attain them. There were meaningful negotiations which ultimately meant the Maltese plan was readily approved.

It was hardly surprising that the European Commission described our national Recovery and Resilience Plan as environmentally ambitious. 54% of the investment emanating from our RRP are addressed towards environmental change. First and foremost directed towards the decarbonisation of road transport and wideranging initiatives of retrofitting in both public and private buildings.

The Recovery and Resilience Facility represents the greatest act of solidarity displayed among European Member States. It is the tool we have concertedly picked, to not only to fight adversity, but attempt to emerge stronger, both socially and economically, out of the largest shock ever experienced in peace time.

European funds are the most effective manner by which the Union is felt tangibly in every corner of the union. This year was no exception for our society as European funds assisted the local healthcare system when at times it was tested to its limit by an unprecedented public health crisis. For the near future, emphasis is laid onto quality primary healthcare in the community and a €33 million worth of European funds will shortly result into a regional hospital in the heart of Paola, endowing the southside of the island with fully-fletched medical services, including dentistry and mental healthcare.

Considering that after the replacement of heavy fuel oil in the generation of electric power, road transport remained the largest contributor to greenhouse gas emissions in Malta, determinate intervention was required in the country’s physical infrastructure to address congestion. European funds underpin the largest investment ever made in the Maltese road network in the form of the Marsa Junction, together with the Santa Lucia underpass, which in conjunction, facilitated traffic flow from and towards the south of the island. European funds also made possible the delivery of the Central Link project earlier this year, which is releasing the urban core of the island from stifling bottlenecks.

Sustainability is not equal exclusively to a better road network. Although a long road lies ahead to embed sustainability into the ordinary order of things, an initiative like Wied Fulija offers more than just a glimmer of good prospect. From a wasteland hosting no less than two billion kilograms of waste, diligent employment of European funds resulted in the site being converted into a beautiful family park, a green space rich in biodiversity. 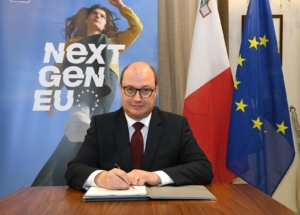 Sustainability is very much related to self-sufficiency. The long spans of drought we experience and the shortage of freshwater are by now common knowledge. The risks this brings to our sustainability cannot be overstated. European funds lied behind this year’s inauguration of the new reverse osmosis in Gozo which

means that we are capitalising even more from our natural surroundings and turning geographical limitations into opportunities. It also means that the sister island is no longer dependent for its own water production.

Important consultations are underway to maximise the funds available for the local operators of our natural resources – farmers, producers and fishermen – the people whom indeed ensure our sustainability.

This year brought its own challenges but a mixture of sturdy negotiations, wide consultation and diligent administration, meant that European funds have helped to yield a healthier society looking towards a more sustainable future for the new year.

Finally, I would like to extend my heartfelt wishes for this festive season and the new year for all.

LESTI GĦALL-ISFIDI TAS-SENA 2022
Scroll to top
We use cookies on our website to give you the most relevant experience by remembering your preferences and repeat visits. By clicking “Accept All”, you consent to the use of ALL the cookies. However, you may visit "Cookie Settings" to provide a controlled consent.
Cookie SettingsAccept All
Manage consent